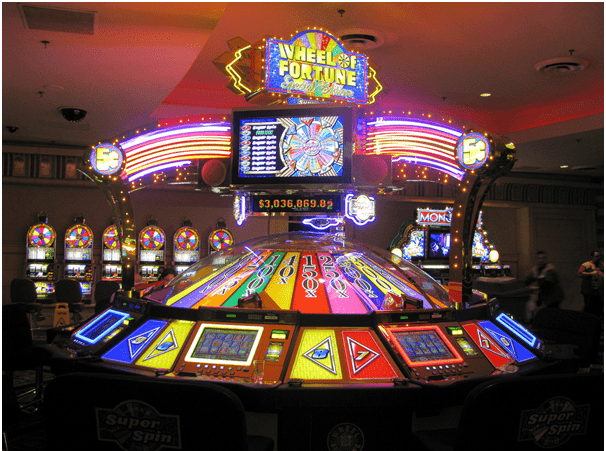 Wheel of Fortune slots machines, come in a variety of game formats like Five Times Pay, Double Diamond, Red, White, and Blue Wild Star, etc. in the standard 3-reel format and associated pay tables. The twist is that the machines are equipped with a free spin symbol that gives you a bonus payoff of anywhere from 25 coins to 1,000 coins when it lands on the payline. The amount of bonus you receive is determined on a “wheel of fortune” that is mounted at the top of the machine and which starts spinning when you press a button to activate it. Just before the wheel starts spinning the machine’s sound effects trigger a simulated studio audience shouting “wheel…of…fortune!” and the fun starts. Not only are the player’s eyes riveted on the spinning wheel, but so are neighboring players who congregate around the machine when they hear the “audience” shout.

The excitement associated with the game, the lights and the sound effects, the prospect of not only the bonus spin but also the top award jackpot in the tens of thousands of dollars, and the alluring spectacle of the Wheel of Fortune slot machines themselves are all very enticing to slot players.

The Wheel of Fortune slot machine from IGT

IGT made their first Wheel slot machine in 1996 using various elements based off of the show for bonuses, such as the Wheel and Bonus Round podium. In the five-slot game, three symbols needed to appear for the player to access the Bonus Round. It is one of the most popular slot games machine played worldwide. This slot game is based on the theme of one of the greatest television games in the United States known as Wheel of Fortune that first aired in 1975 and was created by Merv Griffin. Wheel of Fortune replaced another popular television show known as Jeopardy which was also created by Merv Griffin. Like many other slots based on movies and television series, Wheel of Fortune slots include exactly the same characters as from the 1975 show. Even the host and the hostess that appear in the slot game are the same as that in the hit television game show.

There is another interesting story attached to it that this television game show, is actually based on yet another popular game Hangman. Contestants in the game show would be asked to guess the letters in a word puzzle that is based on a unique category every round. The players then take turns to spin the wheel of fortune in hopes of earning some money while also guessing the right letter for their word puzzle. The number of letters that they guess correctly are then multiplied by the value at which the wheel of fortune rests, and the earnings are then awarded to the contestants. As the contestants earn more money, they get the option of buying vowels or taking control of the spinning wheel of fortune. 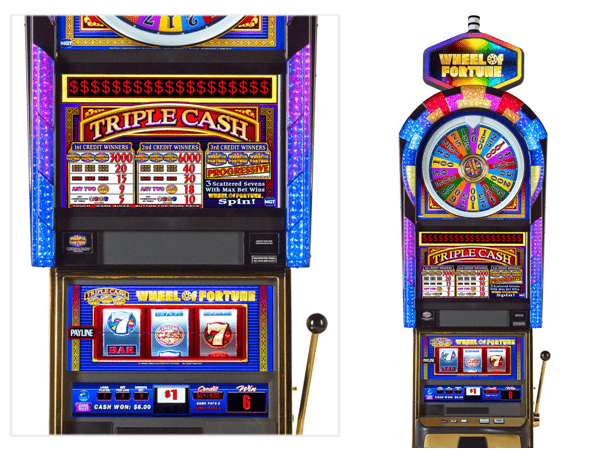 Wheel of Fortune helped many players as well as the owners of the slot machine to reap enormous rewards from it. Wheel of Fortune has long been a favorite among casino players and every new release ensures that a fresh load of excitement for anybody who plays the game.

Wheel of Fortune makes use of the Siberian Storm slot theme. The main concept of the game is derived from the fortune wheel. However, when you come across more than 3 scatter symbols on the same payline in any direction, the scatter symbols will transform into smaller wheels that spin and generate more symbol combinations. The players find triple extreme spin bonus game more exciting and this bonus game is activated when you come across three or more bonus symbols in the reels. As soon as you encounter these, the game is designed to run a series of animations that provide the effect of being teleported to an actual game show. The lighting and the surround sound effects create a stunningly realistic experience when this happens.

The game show will include three wheels which are red, yellow, and blue. The yellow wheel is used to determine the multiplier amount, while the other two are used to determine the amount of credit awards. The game show will involve you choosing an envelope that contains a category for the word puzzle. The moment you pick one, the points on the three wheel start adjusting to a certain value and once the pointers have been aligned, the spins and the final values on the pointers will determine your bonus.

Slot games you can find to enjoy at Wheel of Fortune 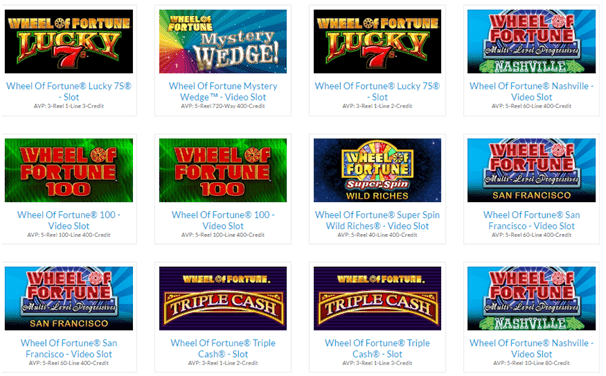 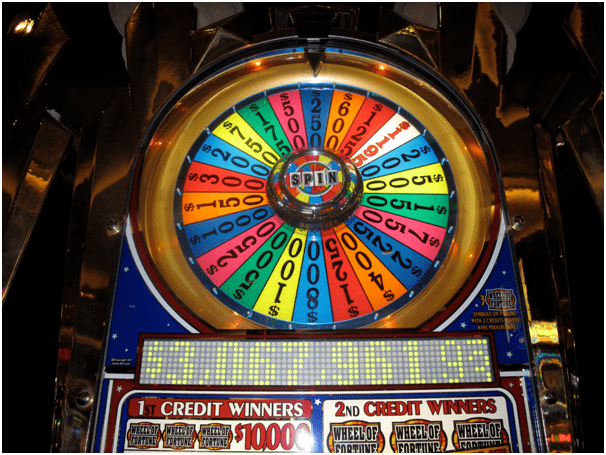 The most recent version of the popular slot game Wheel of Fortune is the Wheel of Fortune Triple Extreme Spin. This machine includes a non-conventional design and makes use of three mechanically operated spinning wheels. This adds to the charm of the game by providing the player with an exciting opportunity to spin the concentric discs. The new design may look a little complicated, but nevertheless, a brilliant innovation by IGT adding to the game’s charisma. In addition to this, the Wheel of Fortune machine also includes overhead plasma screens and surround sound systems that are strategically placed on top of the machine to give a stage feeling to the players. In addition to this, each play station also include LCD screens, specialized lighting systems that add to the aesthetic appeal of the game. The machine also includes an intelligent multi-player interface. This enables three games to be played simultaneously on different screens and the reload feature ensures that the wheels can spin instantly and you can win more when the symbols at the center of the wheel lock. 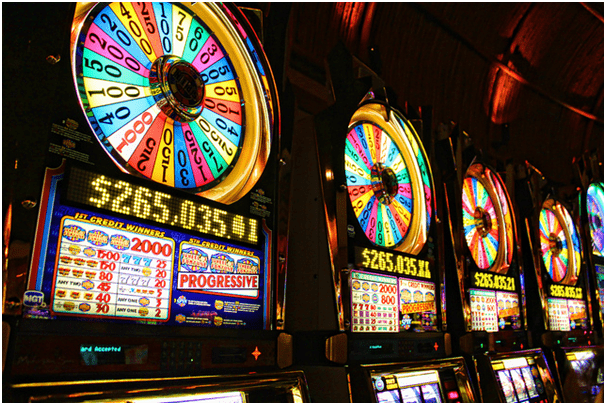 Wheel of Fortune is available in the following popular formats: 3 Reel, 5 Reel, and Video Machines.

Wheel of Fortune can be played at virtually any limit. With machines ranging from 25c credits to $500, the game is available for players with wallets and bankrolls of all sizes.

Many of the IGT Wheel of Fortune video slot game includes 5 reels as well as 5 paylines. Even with the lesser number of paylines, the game includes over 700 possible winning combinations on every spin. The denominations range between $0.01 and $5 in these machines. The highest payout you can expect from Wheel of Fortune is 50,000 credits. However, the second largest winning combination will only earn you as much as $2,500 credits. In addition to this, the biggest jackpot that you can earn is worth 0.5million credits. Wheel of Fortune slots include payouts for symbol combinations from left to right as well as right to left increasing your chances of winning to a great extent. 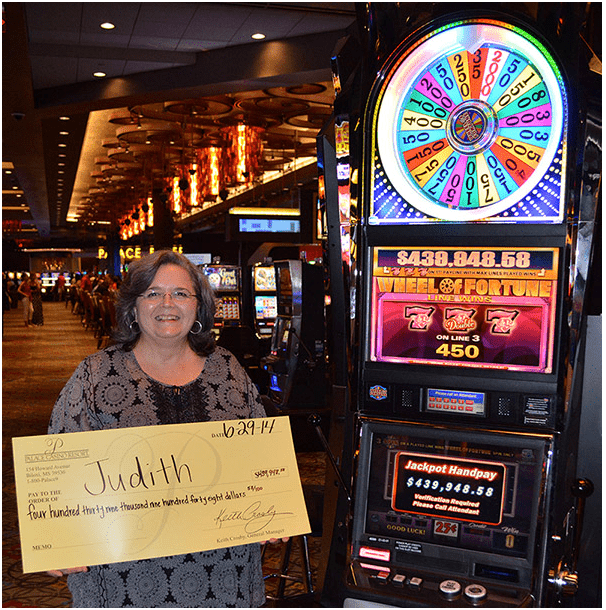 Bonus rounds in video slot machine, or in the case Wheel of Fortune real slot machine, spins, are the primary goal of this game. Outside of winning a jackpot, the bonus round is where most players will find their greatest opportunity to win a sizeable amount.

There are a few different ways to achieve a spin in Wheel of Fortune, depending on the type of machine you are playing. Some games require that a “Spin” symbol be found on each of the three reels. Other games require that a Spin symbol both be found and in a line on the machine. Lastly, some games earn a Spin round when the symbol appears in the middle of the last line online. The rules for your particular machine will be made clear in the payout table above the lines and below the wheel itself.

Payout sizes for Spin rounds vary greatly depending on the size of the machine you are playing and whether it is a progressive or a fixed payout. Be aware that the amounts indicated on the tiles of the wheel are indicative of credits earned, not actual dollars. Unless, of course, you are playing on a $1 bet credit machine, in which event they will be one in the same.

The symbols in the IGT Wheel of Fortune slot game include random objects such as fruits, vacations, cars, or any other object that you may win on a game show. The game also includes a wheel of fortune symbol which is a multiplier and also replaces other symbols to form combinations while giving you double payout. The Wheel of Fortune symbol can replace any symbol on the reels except for the scatter symbol. The game include three bonus jackpots here in the video slot one on each reel that allows you to collect certain bonus rewards. In addition to this, there is also an exciting Wheel of Fortune bonus game that allows players to spin the wheel while answering puzzles and accumulating jackpot prizes and bonuses. However, you may have to wager the maximum bet to play this feature. 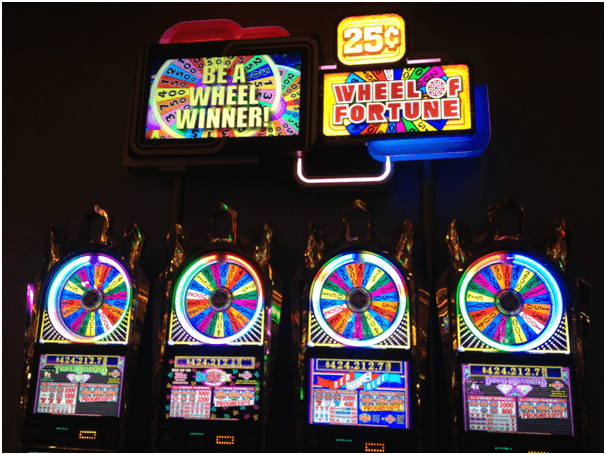 The popular game has changed over the years with plenty of new rules and exciting rounds added to the game. The show usually ends with a special bonus round that allows the contestants to spin the wheel to get a shot at winning the jackpot.

The primary jackpot in many games is progressive, but there are many machines where the amount is fixed. In progressive slots, the amount may vary anywhere from a few hundred thousand to over a million.

Hitting the progressive jackpot in Wheel of Fortune is, as you might imagine, exceptionally difficult. The requirements for winning the progressive amount are different in each machine. Some require consecutive symbols, while others require a pattern like 2, 3, 4, etc.. The pay table above the reels will indicate the prerequisite for a jackpot on any given machine. It is important to note that, like many slot machines, a max bet is typically required in order for any spin to be eligible for a progressive win.

Where to buy Wheel of Fortune slot machines? 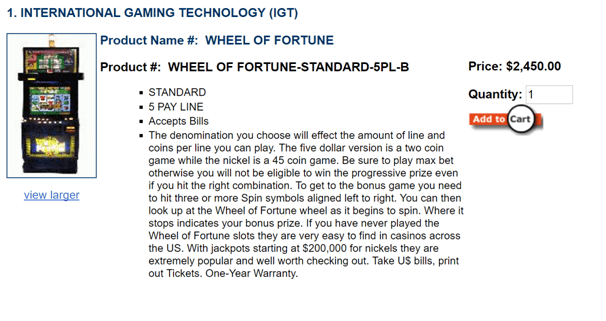 Many sellers or casinos sell their old wheel of fortune slot machines to the public. You can buy from any online store like ebay, amazon or realslotmachinesforsale. Also if you are interested in getting a new one then you can find at the gaming developer website like the IGT. Remember to know in detail about how the machine works, parts of machines you may need to repair if you are buying an old one, price and shipment details and most importantly the legality of having this machine in your state.

Wheel of Fortune slot machines are just wonderful with loads of features and the game show including the lighting, theme, music and the fun involved in spinning the wheel.