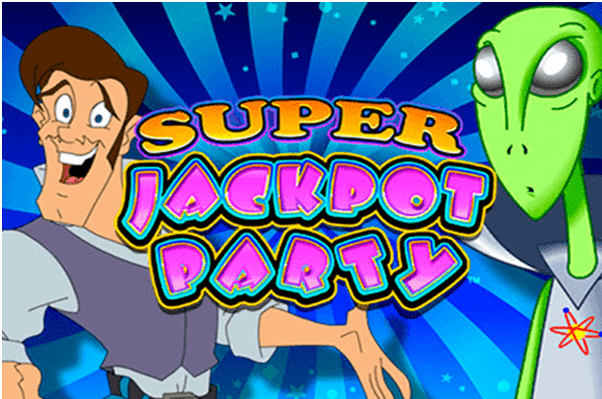 WMS Super Jackpot Party is great sot machine developed by WMS Gaming. WMS also develops video lottery terminals and software to help casinos manage their gaming operations and offers online and cell phone games. The company is based in Chicago, Illinois. WMS is a subsidiary of WMS Industries, which became a wholly owned subsidiary of Scientific Games Corporation in 2013.

WMS entered the reel-spinning slot machine market in 1994, and in 1996, it introduced its first hit casino slot machine, Reel ‘em In, a “multi-line, multi-coin secondary bonus” video slot machine. It followed this with a number of similar games like Jackpot Party, Boom and Filthy Rich. By 2001, it introduced its Monopoly-themed series of “participation” slots. Since then, WMS Gaming has continued to obtain licenses to manufacture gaming machines using several additional famous brands. The company continues to sell gaming machines and to market its participation games.

The Super Jackpot Party is one such slot machine from Williams Interactive (as WMS is known). It is not just a party by name, but also one of the loudest and most colourful slots to ever land just about anywhere. You can call it downright crazy, with random noises and animations all going off even when nobody is playing on the machine! The game has retained all of the madness as it has made its way online, with the only major change being that it actually comes with a mute button if it all gets a little too much. Many new WMS video slots include a luxurious seat, with Bose speakers embedded in it, that give a three dimensional effect when you hit certain bonuses. Combined with vibrations from the chair too, this gives an incredible experience that you would not get with an online slot machine.

This is a 5-reel video slot game that offers a betting range that goes as high as 100 coins when all paylines are activated. Graphics are of aesthetic design, but the 25,000-coin standard jackpot is the one that players look forward to. Players who land 5 Super Jackpot Party symbols on an active line will rewarded with this massive jackpot if the bet is right. If possible, it is recommended that a max bet be applied to all spins when playing Super Jackpot Party in order to get the most out of it.

There are variety of party symbolism, the reels are filled with icons that will make you want to throw a party. Symbols include a Gift Box, Glitter Balls, Balloons, Party Cups, Cocktails, and a couple of Lucky Number 7 symbols in a variety of colors. These various 7 symbols payout on a variety of mixed combinations, assuring players of frequent wins, though smaller in value for the most part.

Super Jackpot Party comes with many features and bonuses. The Disco Ball is wild symbol and appears on reels 2 through 5. It replaces all symbols other than the 2 Feature symbols.

When the two Feature symbols appears on the first, third, and fifth reels, the Party Feature is activated where you are presented with a grid of presents to select from that contain cash prizes, special features, or party poopers. Party Poopers come in the form of a Cop, your Boss, or a party hating Alien, all of which will end the Party Feature and take you to the Party Favor round.

Then there is party animal feature that could further reward you with the Multiplier Feature, the Dance Feature, or the Whack-a-Pooper Feature. However, if you happen to receive a Party Saver, a gift that will save you from the party poopers and return you to the Party Feature to continue where you left off before the Party Pooper ended all the fun.

A Surprise Party can also trigger the Party Feature and will randomly occur on any spin that does not contain any of the Feature symbols. When this happens, the screen goes dark and the party lights go up, triggering the Party Feature by surprise.

With Whack-a-Pooper feature bonus is reminiscent of the whack a mole carnival-style game you may be accustomed to. In this bonus players are given a chance to execute 3 opportunities to whack a pooper with a rubber hammer and win the random bonus prizes underneath. Prizes include multipliers worth 2-5X your total bet or an extra pick, which will afford you another round in the Whack a Popper game or the Dance Feature.

The Dance Feature will allow players to attend the party and win cash prizes determined by the dance bonus meter that increases so long as the Party Animal continues dancing. The result could be a bet multiplier worth anywhere from 8X to 57X.

So you see there is a regular action flowing in the game as you unlock slot after slot in this game.

Slots that can be played at Super Jackpot Party slot machine

If you are interested in getting in a DVD format then to enjoy this slot online you need AMD/Intel Pentium IV 1GHz or higher CPU; 2 GB RAM Windows XP, Vista, 7, 8, 8.1, 10 (32 or 64 bit) with Administrative Rights DirectX 9.0c compatible 3D Video Card (128MB or higher) as System Requirements.
Also 2 GB Free Hard Disk space, Mouse, Keyboard, DVD-Rom drive and Internet for additional content. Note that integrated and laptop video chipsets may work but are not supported. This slot costs $9.95 at Amazon store.

But if you are interested in having a real slot machine then you can buy one from ebay, amazon or realslotsmachinesale websites online and will cost you above $1000  or more (price varies from site to site).

If you owe a slot machine then also you can have super jackpot party slot machine parts too at these online store in case you need to repair one.

So this slot machine is super cool to have for fun and entertainment with variety of ways to win, complex and multi-faceted bonus features that are creative, entertaining and will hook the players for hours to play.